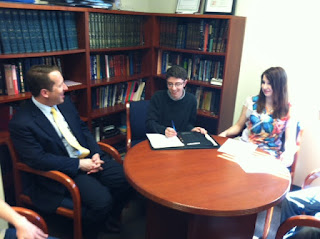 I was so proud of the kids. They really prepared to lobby him hard on Iran sanctions. They got all of their talking points from AIPAC and there was one piece of legislation that he had not cosponsored.

When they got to the meeting and outlined the talking points, he surprised them by saying that he had recently signed on to that particularly bill. I don't think you can have a more successful lobbying session than that!

Congressman Smith is incredibly pro Israel. He believes that support for Israel is good for America. He feels that a great deal of his constituency, which incorporates almost the entire state of Nebraska, feels the same way.

The kids really enjoyed meeting him. he is well versed on the issues, very articulate, but also very candid and easy to talk to.

Teens 4 Israel mostly expressed their appreciation for him taking time out of his schedule to meet with a group of teens that are not even in his district. Many thanks to AIPAC for encouraging the teens to be politically active and for giving them the tools and the knowledge to be a part of the discussion about the US Israel relationship.