Satmar and AIPAC meet in Omaha

Not many people know this, but Omaha is a crossroads that serves a meeting place for Jews from all over the world, of every different background, and every point of view.

Practically every day at our daily minyan we are joined with Jewish people from all over who are either passing through Omaha on their way East or West, or have some business here, or some relatives or friends to visit here.

This week serves as a perfect example of the diversity that we experience here.  On Shabbat, in addition to people from almost everyone of the 50 sates who came in for a bar mitzvah at shul (we had a Jew from Arkansas here.  There are Jews in Arkansas?) we had the privilege of hosting two Satmar Chasidim for Shabbat as well.
These two gentleman were here doing some Kashrut supervision at a company that produces a kosher egg product used for industrial baking.  They have spent shabbat with us a few times in the past as well.

On Sundays after morning minyan a number of the teenagers stay after and we learn Gemara together.  The two chasidim were at minyan so I asked them if they would stick around and learn with me and the boys.  They were happy to do so.

I tweeted a picture of us learning.  My father, who is not on twitter, said he heard about it from a Satmar client of his whose son follows me on twitter!  I was retweeted by a #Satmar Chasid!

It was a great experience for the boys!

First of all, the boys got to see that the gemara that they are learning is the same gemara that Jews all over the world are learning.  The chasidim spoke broken English, as their first language was yiddish, but when we learned together there was no language barrier.  The universal language Torah transcended anything else.

After we learned a little I asked the Chasidim to share some thoughts with us.  They told the boys how impressed they were with them.  Over the weekend they marveled at the commitment that they showed in coming to shul and learning Torah. 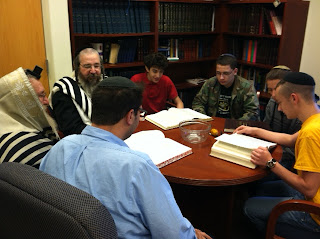 The boys also learned that there are different types of chasidim and each type is unique in some way.  We asked what defines a Satmar chasid.  They answered that there are many things that define a particular group.  One is ancestry.  They happened to come from Hungary where Satmar is from.
But they also said that they were inspired greatly by the late Satmar Rebbe, Rabbi Yoel Teitlebaum.

When he first came to this country after the war Jews were afraid to walk in the streets with a Yarmulka, let alone in Chassidic garb.  They said that it was the Satmar Rebbe who insisted that Jews not be afraid to express themselves the way that they see fit.  The Nazis tried to destroy the European Jewish community.  The Satmar Rebbe said that we cannot be embarrassed to try and rebuild what we had in Europe here in America.  He inspired others to follow him and in the face of ridicule, discrimination and antisemitism he succeeded in building a proud American Jewish community.

They said that if it were not for the courage of the Satmar Rebbe then there would be no other types of chasidim in the United States.  He paved the way for others.

If that is in fact true than I contend that all Jews owe him a debt of gratitude.

In JCCs, Federation offices, and even the homes of very secular Jews you can always find a picture somewhere of a bunch of chasidim dancing.  My friend Joel, whenever he sees those pictures asks, "do you think Chasidim have pictures of secular Jews dancing hanging on their walls?"  The iconic image of the chasidic Jew is something that every Jew identifies with in some way and if not for the Satmar Reebe America may have never known that image.

They also spoke about how the Satmar Rebbe was clear in his anti Zionist views.  Many Jewish leaders opposed the Jewish state, but none are as famous as the Satmar Rebbe in his opposition.  (The so-called Chasidim who met with the leader of Iran claim to be Satmar but mainstream Satmar has nothing to do with them.  They are a small fringe group.  The Satmar Rebbe was very thoughtful in his positions, and he believed that the Jewish state would endanger the lives of Jews.  He would obviously not meet with an insane lunatic who has made statements about the destruction of the Jewish people and denied the Holocaust.)

This was a great prelude to the Monday evening meeting of our Teens 4 Israel youth group.  Teens 4 Israel is a group of teens from all of the synagogues who share a passion for Israel advocacy.  Last year we went on a fantastic trip to New York, and this year we hope to attend the AIPAC policy conference in Washington DC.  At the meeting the leaders of Teens 4 Israel set up some goals for this coming year.

The next night, Beth Israel hosted a community briefing with AIPAC.  The speaker was Elias Saratovsky, the regional AIPAC director.  He spoke briefly about what AIPAC is doing in preparation for the upcoming election and then took questions from the crowd..

What I love about Beth Israel is that we are a place where all views and ideas are discussed.  As the only Orthodox shul in the State of Nebraska my job is to try as best as possible to expose the people of Omaha to the great pluralism that exists in Orthodox Judaism.  There are many times where after presenting both sides we take a stand on an issue, but there are also times where we let an argument stand as a Teiku.

But on all issues are main objective is to get people to use their minds and think critically about Torah and the issues facing the Jewish people.
Posted by Jon Gross at 11:43 AM