Ze'ev Jabotinsky is alive and well in Nebraska!

Omaha, Nebraska is currently the largest official chapter of the Betar youth movement in North America.

Betar was originally started in 1923 in Riga, Latvia by Zionist leader Ze'ev Jabotinsky.

For the last 90 years Betar has inspired Jewish youth throughout the world and was extremely influential in the lives of great Jewish leaders, including a number of Israeli prime ministers.

Betar is still strong in Australia, South Africa, and South America, but has been in serious decline in the united states - until recently.

After learning about Jabotinsky and his philosophy there was interest in starting a Betar chapter here in Omaha.  A new member who just moved here told us that when he grew up in Australia he was very active in Betar.  He contacted the office in Israel and connected us with Yarden Tenenbaum, the new director of international programs for Betar international.  He was recently charged with the task of jump starting Betar in North America.

By coincidence he was making his first trip to the US so we invited him to add Omaha to his itinerary.

Yarden came to Omaha and he met with some of our active teenagers. They immediately recognized historic the significance of the opportunity of being the group to revive Betar in the US.  By founding the Omaha Betar chapter they are attaching themselves to the group that played a pivotal role in the formation of the state of Israel and the modern Israeli army.  They would responsible for carrying on the Betar legacy that includes Jewish heroes Zev Jabotinsky, Yosef Trumpledor, Mordechai Anielewicz, Menachem Begin, Dov Gruner, and many more.
Two teenagers were elected as the head of our chapter and are currently effectively the leaders of all of Betar North America. 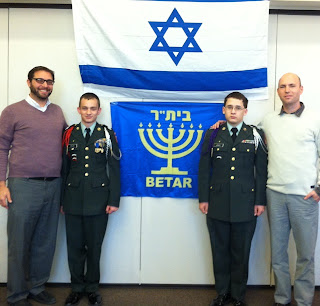 In the last 90 years Betar has been at the center of some of the most significant events in modern Jewish history.


Today, thankfully we do not face the challenges that our predecessors faced.  But Jabotinsky's philosophy is still relevant, and many of his values such as dignity, discipline, and Jewish pride are sometimes severely neglected.
Our group had its first meeting on Sunday.  We read some of the history of the movement and started discussions about how Betar will be relevant to Omaha youth.

Unfortunately, today's Jewish youth movements in North America are divided by religious denominations.  I cannot think of an existing group that appeals equally to Orthodox, Conservative, Reform, and non-affiliated.

Jabotinsky himself was not observant, but his movement was not hostile to religion and in fact many observant people filled the ranks of Betar.  Betar just may be the one group that can unify all Jewish youth in North America and rally them around core Jewish values, love of the Jewish people, God, and country.

I hope Yarden is successful at starting other chapters in North America.
For more information or if you want to start a movement where you live you can check out www.betar.org.il or e-mail yarden@betar.org.il
Posted by Jon Gross at 3:38 PM