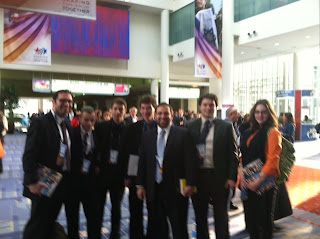 It was the experience of a lifetime!

In addition to the Teens 4 Israel our delegation included a dozen people from Nebraska, making this our largest delegation in history.  Next year we hope to at least triple that number.

You can see all of the AIPAC speeches o their website, but I must say there is nothing like being there in person!

The conference alternates between plenaries for everyone and smaller breakout sessions.  The plenaries take place in the large auditorium and are attended by all 13,000 conference participants. They feature the headline speakers which included the Prime Minister of Israel Netanyahu, Former Prime Minister and current defense minister Ehud Barak, and the Vice President of the United states Joe Biden.
The dozens and dozens of different break out sessions are given on a wide variety of topics, each given by the top experts in the field.  Every speaker could be a headliner in their own right.

AIPAC enables participants to preselect their sessions before the conference.  At our last meeting we made our selections and the kids were ready to go.

For their first session they attended a panel discussion on the situation in Syria.  Like all sessions at AIPAC the speakers were all experts in the field and gave an in depth look at the horrifying massacre that is taking place as well as how it may impact the US, Israel, the Middle East, and the world.  This was of particular interest to the Teens 4 Israel because at one of our Teens 4 Israel meetings at Starbucks we heard from a Syrian boy whose uncle in Syria was one of the victims.

While they attended that lecture I went to a special session for Rabbis where we got a chance to hear from Lord Jonathan Sachs, chief Rabbi of the United Kingdom.  I am a huge fan of Rabbi Sachs.  Over the conference I had the opportunity to meet him personally.  At one point during the conference his director of communications and programming approached me and thanked me for always mention rabbi Sachs on Twitter. (@chiefrabbi) 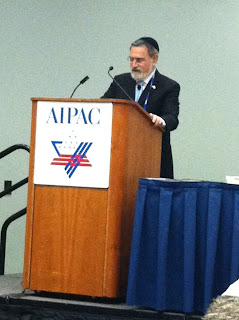 Rabbi Sachs gave the Rabbis some inspiring thoughts on Israel and on Pesach which I would share, but there were 350 rabbis in the room and I imagine most of them, including myself, will incorporate those thoughts into our pesach sermons.  I don't want to ruin the surprise.

In addition to hearing great speakers the kids were also thrilled to meet Jewish celebrities like Israeli ambassador to the US Michael Oren, former director of national NCSY Rabbi Steven Burg, and "America's Rabbi" Shmuley Boteach.  Sadly Rabbi Shmuley did not attend the conference as a congressman this year like he wanted to.

We left the hotel early Monday morning so that we could get through security to get good seats for the opening plenary.  This was only my sixth AIPAC conference.  I have heard that 10 years ago it was hard to get a minyan.  At this conference yarmulka clad heads were everywhere you looked and there were multiple options to daven shacharit minchah and maariv.  We joined a 7 am minyan in one of the conference rooms (there is even a daf yomi class at AIPAC) and then headed straight to the main ball room.  Security was tight because the featured speaker was the Vice president of the United States, Joe Biden.

Before Biden there was a panel discussion moderated by Dan Senor, author of the book Start up Nation.  The Teens 4 Israel had read start up nation.  They met Dan Senor when he came to speak in Omaha two years ago.  They are all big fans.

On the panel was Senator John McCain.  It was a great panel.  The issue of Syria came up.  There is a great deal of uncertainty around Syria.  On the one hand it is a humanitarian crisis.  80,000 have already been killed and almost a million people have been displaced.  On the other hand, to assist the rebels and oust Assad may allow the Syrian stockpile of chemical weapons to reach the hands of radical terrorist groups.
McCain took a strong stand in favor of assisting the rebels and ousting Assad.
He said it was a great shame that we have so far done nothing.

Then VP Joe Biden took the stage.  He is a truly great speaker.  He held the audience captivated for a long time.  He spoke about all of the things that the US has done to support Israel during the last four and a half years.  He contends that Israel has never had a better friend than president Barack Obama.


He ended by saying that Obama is going to Israel and Biden is jealous because Obama can now say "this year in Jerusalem."

it was a great speech and there was really nothing to argue with.  I hope that the historic relationship that Israel has had with the US continues throughout the Obama presidency and beyond.

After the vice president we heard a presentation from Team Space Israel.  They are working to send a shuttle to the moon and finally get an Israeli flag up there.

We heard form the widow of Israeli hero and astronaut Ilan Ramon.  I remember exactly where i was when I heard that he had died.  She subsequently lost her son who was also a pilot.  It was very moving to hear her speak with such optimism for the future.

Prime Minister Netanyahu joined us from his office in Israel.  He spoke about Iran, Syria, and Palestinian peace.

After the plenary we split up for lunch.  I went to a special lunch for Rabbis.

Over 350 congregational Rabbis attended the conference representing over 200 synagogue delegations including 4,500 delegates.  As I have said many times, synagogues are the lifeblood of Israel support.  Anyone who considers themselves a supporter of Israel should be in synagogue every Shabbat joining the rest of the Jewish people around the world as they learn about and pray for the well being of the state of Israel.

Over the rest of the afternoon we split up and heard a number of different sessions.  I heard one about European efforts to prevent nuclear Iran and another on China's Middle East strategy.

Another teen mention that she found many of the speeches too bleak but finally found a session that she really enjoyed - "The Good News in the Middle East."

Later the kids joined up with NCSY groups from all over the country to hear from Howard Friedman.  Friedman is a former president of AIPAC.  This was his 26th conference. But he has been on hundreds of NCSY shabbatons. He has personally taken over 200 congressmen on trips to Israel.  But he said that his most memorable trips to Israel are when he visits with NCSY summer programs like Kollel and TJJ. 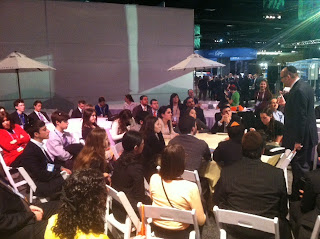 At the evening plenary we heard some great Jewish music, heard from Daniel Gold - the man behind Iron Dome, and heard from Republic Majority leader Eric Cantor and from Democratic Whip Steny Hoyer.  Israel is a truly bipartisan Issue and every congressman who spoke commented on how despite all other disagreements the US house is unified on its support of Israel.

The next day we went lobbying and got to meet with our senators Johanns and Fisher, and with our reps Terry and Smith.  All of our elected officials are staunchly pro Israel.

It was an experience of a life time for the kids.  I have already signed up for next year's conference and I hope that the Nebraska delegation continues to grow.  Many thanks to all of the generous donors who sponsored the teens 4 Israel.  It was a great investment, not only in Israel advocacy by also in the future of our Omaha Jewish community.
Posted by Jon Gross at 10:58 AM