This Shabbos, journalist Avital Chizhik will be our guest on Good Shabbos Nebraska - America's favorite Shabbos morning talk show.  Avital is known for many things, including a letter defending Orthodox Judaism against comments made by iconic Israeli author Amos Oz.

Yesterday I was promoting Avital's visit on twitter, when I got an interesting reply to one of my tweets.


"Hasn't this misquotation gone a bit too far?"

The tweet was from @faniaoz - Fania Oz Salzberger.  She is the daughter of Amos Oz, the coauthor of his latest book, and a famous Israeli historian, writer, and thinker in her own right. 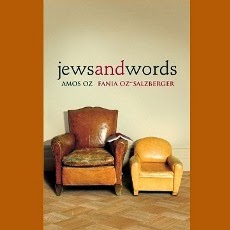 Fania first encountered Avital Chizhik a few years ago when Avital was working on her senior thesis at Yeshiva University.  The subject of her thesis was the memoir of her favorite Israeli author, Amos Oz.  She emailed both Oz himself and Fania when doing her research with a few questions.  Oz and Fania both responded generously, but they never met in person.

A few months ago they had another encounter.  Amos Oz and Fania had just completed their joint project, Jews and Words.  In an interview on Israeli TV Amos Oz referred to Orthodox Judaism as a "fossil."  Avital wrote an amazing piece responding to this challenge (posted here).

This time it was Fania who reached out to Avital.  They had some interesting email exchanges, and each one left the conversation with respect for the other, and following each other on twitter.

When I included @avitalrachel in my tweets yesterday, @fania noticed and decided to join into yet another conversation with Avital.


"not sure what you mean, but we would love to have you on the show to explain.  Ever been to Omaha? @goodshabbosneb"

To which she responded,


"would love to come to Omaha and discuss this on stage with Avital, whom I deeply respect."

I checked her earlier twitter feed and lo and behold - it turns out that today, she is in St. Louis giving a lecture at the JCC!  St. Louis is a short 45 minute flight from Omaha!  She could come out Friday and be here on Good Shabbos Nebraska for Shabbos!

So I reached out to her in private message.  I gave her my phone number and told her to call me so that we could make it happen.

In the meantime she tweeted the following,


"My co-author and I have no "offensive remarks" vs. Jewish Orthodoxy, let alone women like Avital."

She read my blog!!!!!  Fania Oz Salzberger is officially a reader of Amerabbica!
But it also means that I had published something that was possibly inaccurate and seemingly offensive to someone.  That is never my intent so immediately I wrote,


"I am publicly retracting that tweet and personally apologizing if I was offensive in any way."

I then changed the word on my blog post from "offensive" to "provocative."
She replied,


"Gratefully acknowledged, dear Rabbi Jon.  Never been to Omaha (but my co-author has find memories."

A minute after, my phone rang.  It was her!
She was in St Louis, but unfortunately she was going to be in New York for Shabbat by her aunt and then back to Israel.
We had a very pleasant conversation.  She said that she definitely would love to come to Omaha and be a guest on Good Shabbos Nebraska next time.  Her father was a scholar in residence in 2003 at Temple Israel in Omaha and he has fond memories.

I told her that we had interacted before.  About a year ago she and her father were on a live broadcast of the 92nd street Y promoting their new book.  We were watching it in the JCC in Omaha.  When it came time for questions, my wife Miriam submitted a question by text, and that question was the subject of about 20 minutes of discussion between her and her father.  They kept referring to the questioner as "Omaha."

She said that she remembered well.  She remembered thanking Miriam for the question and told me to thank her again.

So after we established that she could not be our guest this Shabbos, I asked her when she would be in the states next.  She told me she would be here again in March.  So I suggested that we host in New York a panel discussion with her and Avital Chizhik.  She told me that she would definitely want to do that.  She said that she was recently at the GA in Israel and she sat on a panel with Rabbi Jonathan Sacks.  While she enjoys hearing him speak very much, he tends to be very politically correct and it is hard to have a real argument with him, but she would enjoy talking more to Avital because she thinks the two of them could have some honest and open dialogue that everyone present would benefit from.

So stayed tuned for March 2014 - Avital Chizhik and Frania Oz Salzberger in NYC.

And don't miss Season 1 episode 7 of Good Shabbos Nebraska - Shabbos 10am ONLY at Beth Israel Synagogue - Where every Shabbos is a shabbaton!