At the season premier we had Shmuley Boteach on the show and he introduced us to Kosher Sex.  This past week we had Rabbi Dr. Moshe Goldfeder who introduced us to Polygamy.  Shmuley is going to be debating against polygamy this coming Shabbos in Mexico and he really needs to speak to Rabbi Goldfeder before he does.

Rabbi Dr. Moshe Goldfeder is professor of law at Emory university and I believe he will likely be recognized within the next few years as one of the great American Jewish thinkers.

At only 28 years old, Rabbi Dr. Goldfeder has his rabbinic ordination, his law degree, and a doctorate in Law and religion.  He is a prolific writer and the topics that he chooses to write on are not timely - they are way ahead of our time!  He is thinking about, researching, and writing about issues that have yet to come up in the mainstream consciousness but will undoubtedly be the hot button issues of tomorrow!

His dissertation, which will soon be a book, was on plural marriage.  He presented a lecture on plural marriage at shul on Shabbos.  Recently, Canadian courts were dealing with the issue of plural marriage and Rabbi Goldfeder was called upon by the mainstream media to comment as he is already a recognized authority in the field.

Plural marriage is already extant in America, in cities and states that people least expect.  When speaking about plural marriage entering the mainstream, he reminded us that the television show Will and Grace did more for the acceptance of gay marriage then any court case.  Today there are no less than five televisions shows that feature polygamy.  This seems to be a credible indication that there is a move for societal acceptance.

The debate over whether gay marriage should be societally accepted is pretty much over.  Even those who are opposed to Gay marriage must admit that the concept is no longer a fringe idea, it has become accepted by the mainstream and, on the contrary, it has become increasingly hard to argue against gay marriage in public discourse.  It is likely that the next debate over the definition of marriage will be about whether America should accept plural marriage.

In this regard, Rabbi Goldfeder is on the cutting edge, and he has already researched, thought about, and written extensively about this topic that is still off of most people's radars.

He points out that Gay marriage was easy legally but difficult religiously.  Legally all that needed to be done was to redefine marriage by substituting the world man for woman.  Ultimately it is still a union between two people.  Religiously Gay marriage causes a problem.

Polygamy is the opposite.  It does not pose a serious religious problem as Judaism, Confucianism, Hinduism, Islam, Mormonism, most forms of Christianity, and many other religions allow for it.  Legally, however, plural marriage is a nightmare as it changes the nature of marriage from a union between two people to a union between three (or more) people.  This is a fundamental shift that would be difficult for our current legal system to digest.

As for Judaism's position on polygamy, Rabbi Goldfeder says that he believes Judaism stands against allowing polygamy.  Not for religious reasons per se, but rather because we experimented with it and it does not seem to work.  Of the 40+ polygamous unions mentioned in the Torah by name, most of them end in tragedy.  There is also extensive evidence in the form of legal documents and Rabbinic responsa of tragic cases that involved more than one wife.

According to Rabbi Goldfeder, polygamy was already taboo in Jewish circles at least 1000 years prior to the famous decree known as the takanat Rabbeinu Gershom that most people erroneously think was the end of Jewish polygamy.  In reality, Jews had abandoned plural marriage long before but kept it legal on the books.  They kept it legal because early Christians claimed that the Bible forbid plural marriage and Jews felt the need to distinguish themselves from early Christians, specifically exegetically, when Christianity was still susceptible to being confused as a sect of Judaism.  By the 11th century this was no longer a concern so for this and other reasons Jews felt that they could officially outlaw plural marriage - which had already been abandoned centuries earlier.

Rabbi Goldfeder told us about contemporary cases of polygamy and how there seems to be a correlation with polygamous societies and all sorts of scary atrocities like abuse, murder, and slaver.  He does not claim that polygamy is necessarily the cause, but one cannot ignore the strong correlation.

In addition to polygamy, Rabbi Goldfeder also spoke about his next book, Almost Human, about Robots in society.  Today technology is moving so fast that within the next 50 years they say we will see the development of Robots that are so lifelike in appearance and in intelligence that they will be practically indistinguishable form human beings. While this seems like science fiction, think about how many things currently exist that were considered science fiction only 20 years ago.  If and when these robots are built, they will present all sorts of ethical conundrums. 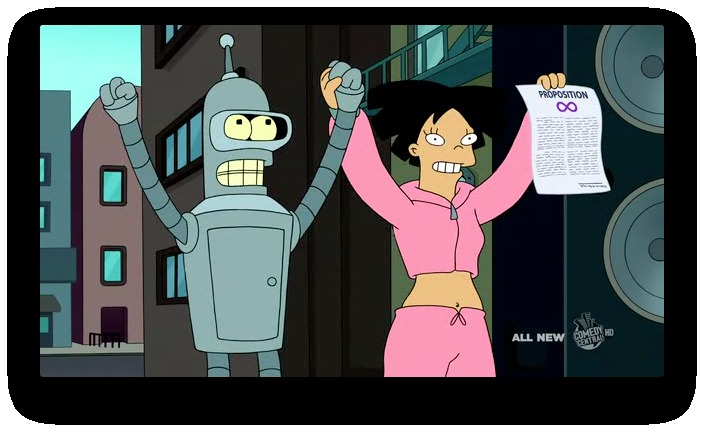 Rabbi Goldfeder contends that the Jewish sages of antiquity were already thinking of such issues.  The Jewish sages do not claim to be scientists.  They were informed men of their day and spoke with scientists and explorers from among the other nations.  If there were reports of mythical creatures in far away lands, the sages were less interested in whether or not they existed and more interested in how we should react to these creatures if they did exist.  What would the moral implications of such creatures be?

The sages dealt with such creatures and Rabbi Goldfeder presented some fascinating sources.  In the 1950s the British mathematician Alan Turing developed what is today known as the Turing test to ascertain whether or not a machine can demonstrate human thinking.  Unbelievably, the sages had a very similar test and discussed how we should treat creatures that successfully passed the test.

I don't want to give any more away.  If you want to learn more wait for Rabbi Goldfeder's book Almost Human.

It was an amazing episode of Good Shabbos Nebraska and Rabbi Goldfeder will definitely be a returning guest in the future!!!

This coming Shabbos will be the most memorable episode of Good Shabbos Nebraska in history when we host BORIS GULKO!!!  Stay tuned for more on that.

Hope to see all of you next week on Good Shabbos Nebraska, every week at 10 am ONLY at Beth Israel Synagogue - where every Shabbos is a Shabbaton.