Today I had the privilege of being able to drive him to the airport.  I intentionally took the most circuitous route to the airport so that I could maximize the drive time with him.

He is one of the nicest people I have ever had the pleasure of meeting.  I really enjoyed talking with him in the car.  I was so impressed by how knowledgeable and thoughtful he is on so many different topics and how forthcoming he is about honestly and openly discussing any subject.  It is clear that this is a man of great humility, honesty, and integrity.

Last night he spoke about his book Matters of Life and Death: A Jewish Approach to Modern Medical Ethics. 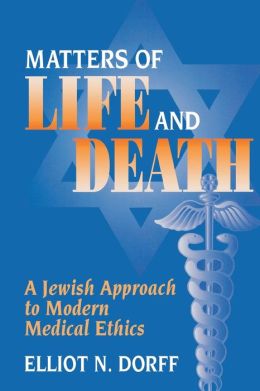 He presented an interesting argument.  There are some authorities who believe that there is nothing new under the sun and for every contemporary issue that arises there are traditional Jewish sources that address the issue.  Whether it be organ donation, stem cell research, human cloning, or space travel, one need only look carefully at the ancient sources of the Torah, Talmud, and codes and one will find that the ancients offered us guidance on all of these issues.

Rabbi Dorff rejects this assumption.  Whereas he does acknowledge that the ancients did have the wisdom to address a great number of timeless issues, they could not even imagine most of the issues and moral dilemmas presented by modern scientific discoveries and technological advancements.  If they could not imagine these issues, then their writings can offer us no guidance on these matters.  So rather than search the ancient sources for specific precedent for contemporary issues, in modern times we should be guided only by general core Jewish principles and values when making decisions.

I have not read his book yet so it was not completely clear to me whether there are practical differences between the way he would address a particular issue versus the way that an Orthodox medical ethicist would address the same issue.

On the way to the airport I asked him if he had ever participated in a public conversation with an Orthodox counterpart.  He said that he had not.  It would be great if a forum like the 92nd street Y would organize such an event.  If anyone out there works for 92Y see if you can make that happen!

Although he spoke last night at the Conservative Synagogue, he was brought to Omaha by the ADL to address non-Jewish audiences on Sunday and Monday.

I have always found it interesting that the non-Jewish world generally looks to non-Orthodox thinkers for guidance on Jewish ethics.  The shelves of Barnes and Noble mostly feature the works of non-Orthodox writers who skillfully articulate their message for the masses.

Which leading Orthodox Rabbis have authored books that have been best sellers or that are viewed as universally relevant (other than Shmuley Boteach)?  When was the last time that a Rosh Yeshiva from Yeshiva University or Lakewood was asked to address the AMA about medical ethics?  There are a few Rabbis who are regarded outside the Orthodox world as experts - Rabbis J. D. Bleich and Michael Broyde come to mind - but they are exceptions, not the rule.

That is not to say that Orthodox Rabbis have nothing to say about contemporary issues.  On the contrary, they have much to say:
But somehow the impact is not felt by the non-Orthodox Jewish community, and certainly not by the non-Jewish community.

Granted, most serious Orthodox works on medical ethics are written in Hebrew, but if these works had the potential to make an impact they would quickly be translated into English.

There are several reasons that I think Orthodox medical ethics do not make an impact.

To be clear: whenever I am presented by my congregants with ethical dilemmas presented by modern medicine -which is not so uncommon unfortunately - I immediately turn to the Orthodox Rabbinic authorities who I know and trust. I happen to know quite a few who despite the many demands on their time make themselves readily available to community Rabbis like me and my colleagues throughout the country.

These Rabbinic authorities that I have consulted with in the past are completely knowledgeable on any given medical issue.  Often they are more knowledgeable then the doctor that I am dealing with simply because these expert Rabbis often have more experience with the rare morally complicated cases and the Rabbis are usually more up to date on the literature pertaining to these ethical issues than most doctors are.  Doctors are skilled in the procedures but in many instances they have not taken the time to think through the greater consequences to certain actions the way that these expert Rabbis have.

In actual cases these authorities weigh every issue independently and take into account as many facts and variables as it is possible to account for in real time.  In the many times that I have had to consult, I never felt that a Rabbinic authority provided me with an answer that was not informed, rational, logical, and based in a morality that was easily understandable.  I have the greatest respect for the Orthodox Rabbinic authorities.

That is exactly why I want them to make a greater contribution to general society.  I do believe that the Torah offers valuable insight that is completely relevant to contemporary problems and that the world would benefit a great deal if Orthodox experts on medical ethics would make the wisdom of the Torah available and accessible through articulate writings that make the underlying morality of Jewish law more apparent.

But as Pharoah said, "Could we find a man like this in whom is the spirit of God?"
Posted by Jon Gross at 9:06 PM