Last night was the first official meeting and it was a big success.

It all started about a month ago, after a lecture at the JCC, I overheard a young man say something about chess.
"Did somebody say chess?" I asked, and I introduced myself.
The young man turned out to be John Hartman, the Omaha Vice president of the Nebraska State Chess Association.  He told me that Omaha dies not have a serious chess club for top players.  He was trying to set one up, but they currently did not have a place that they could call home. So I said, "they do now!"  And that is how Beth Israel got to be the center of serious chess in the state of Nebraska.

The club is named for Jack Spence (born c. 1926 died 1978).  Spence was a Chess enthusiast who took upon himself to be the official chronicler of all serious games played in Omaha.  Back when chess masters used to tour from city to city (before the internet put an end to that) Omaha had its share of famous chess masters pass through.  Jack Spence would record the games and type them up, leaving space for diagrams which he would import later.  Then he would have the books bound and sometimes published.
Spence may have been one of the most prolific chess chroniclers in the country.  By trade he was a lawyer but his life was chess.  He died before his time, but because of his efforts Omaha has a rich recorded history of chess.  It is very fitting to name the club in his honor.

Last night was the first event.  Doors open at 7 but when I arrived to open up at 6:30 there was already a line of people waiting by the door.

Our first event was a blitz tournament.  5 minute games.  All the stars came out last night.  We had Joe Knapp, last year's Nebraska State champion, and Ben Fabrikant, this year's champion and member of Beth Israel synagogue.  (I got to take my picture with both of them!) 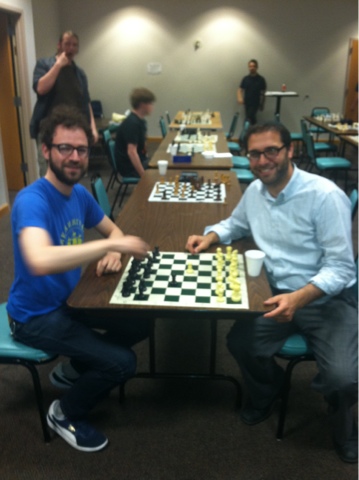 We had a full house and everyone had a great time.  We will meet every Tuesday night from 7 to 10 (except Jewish holidays) and in the future we will have lectures, rated play, and even tournaments - including the city championship!

We are really privileged to be able to host the Spence Chess club.  This will be great for the city of Omaha.
Posted by Jon Gross at 6:56 AM