Rabbi Rosenbaum and the Legacy of Rabbi Zvi Hirsch Grodzinsky

Rabbi Zvi Hirsch Grodzinsky was a great Rabbinic figure who lived in Omaha, Nebraska from 1891 until his death in 1947.  Rabbi Grodzinsky was a prolific author of Jewish law and considered at the time to be one of the greatest Torah scholars in America.  He was a cousin of the famed Rabbi Chaim Ozer Grodzinsky, who was considered to be the greatest Rabbi in the world before the Holocaust.

In the 1980s Rabbi Jonathan Rosenbaum researched the life of Zvi Hirsch Grodzinsky and wrote a scholarly paper that is until today considered to be the authoritative essay on the life of this Torah scholar.

I introduced Rabbi Rosenbaum to the Tatelman's and we sat down and learned some Torah together. 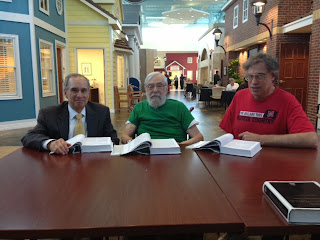 Tomorrow Rabbi Rosenbaum will talk a little about Rabbi Grodzinsky, but mostly about his expertize in Biblical archaeology, having studied at Harvard under some of the most influential scholars in the field and having been the deputy director of the Ein Gedi excavation in Israel.

It is going to be a great Shabbos.  It all begins at 10am every Shabbos ONLY at Beth Israel.