Season 1 of Good Shabbos Nebraska is so far a big hit.  The network (aka my synagogue board) has given the green light to go ahead with the popular talk show indefinitely!

We began by talking a bit about the devastating Pew report.  Rabbi Rosenbaum has a unique perspective as he has been a Rabbi of an Orthodox, Conservative, and Reform congregation.  There are not many people alive today who have that type of perspective.

I asked Rabbi Rosenbaum if he could tell us a bit about his education at Harvard.  He was a student of some of the most influential scholars of the 20th century, including Frank Cross, G. E. Wright, and William Moran.
He was a classmate of the famous scholar Jon Levinson and of Omaha's own Leonard Greenspoon.

Then we jumped right into the parshah.  This past week's parshah was lech licha - the origin story of Abraham.  Chapter 14 tells the story of Abraham's battle against 4 kings who teamed up to wreak havoc on the ancient middle east.  This chapter is unique as it gives us a clear understanding of the time period at which Abraham lived and some details about the rest of the ancient world at that time.

Rabbi Rosenbaum brought out a map of the ancient world and proceeded to show us which lands these scholars believe are being referred to and what evidence we have to the existence of these four kings. 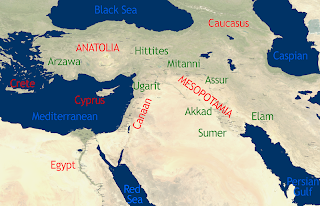 This has always been one of my favorite chapters of the Torah and it was so enlightening to finally get some of the background story about what was going on at that time.

Rabbi Rosenbaum stressed that the Torah is a sacred book but we should never forget that it informs us about history as well.  It is a reliable historical document that does not give us the whole picture, but no historical document ever does.  But just as scholars use the works of Homer and the Epic of Gilgamesh to find clues about the ancient world that can then be reinforced with archaeological evidence, the Torah is an invaluable document that sheds light on the time period of which it speaks.

After every episode of GSN we have a kiddush lunch which the entire community is invited to.

After the kiddush he spoke about the dark underbelly of modern archaeology.  Apparently there are forgeries circulating that are so authentic that they can fool some of the top experts on the ancient world.  The reason for this is that these forgeries are being manufactured by people who have extensive academic archaeological training themselves.  Apparently, there is more money in selling forgeries of priceless antiquities than there is in being an associate professor at of ancient history.

This is a big problem for many reasons, not the least of which being that by manufacturing false antiquities people can reconstruct or construct false histories that are now backed up by "evidence."

It was a great episode of GSN.

Next week our annual AIPAC Shabbos.  Our guest on Good Shabbos Nebraska is Dr. Jonathan Adelman of the University of Denver.  Dr. Adelman was the dissertation adviser of Condalisa Rise, and he has written about and lectured extensively about the Middle East, China, Russia, and just about everything.  It is a pleasure to welcome him back to Omaha again.  It is going to be a great Shabbos!
Posted by Jon Gross at 3:10 PM