Last year before Pesach we sold Warren Buffett our chametz.

Besides being a great story, it raised awareness for the local food bank- and we had the most successful pre-Pesach food drive ever.

As the holiday season was approaching, I decided to give him a call and ask the wizard if he would  participate again.  And he did.

This year however, I decided to introduce him to the holiday of Purim.

The Rambam writes that it is better to give to the poor than to give to one's friends because Purim is a day of joy and "there is no greater joy than gladdening the hearts of those in need."

Purim, Pesach, and all Jewish holidays are a great time to think of your local food bank.

My wife Miriam made up two mishloach manot to give to Warren Buffett. One special for him with Coke and Sees Candy- two items that we knew he would enjoy. 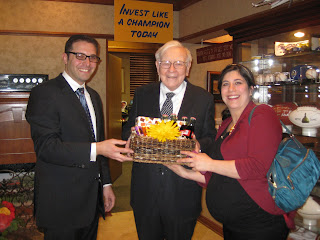 The larger one was filled with all of the most needed items found on the Food Bank for the Heartland's website.

The list included pork and beans.  We of course did not give him pork, Instead we gave him a can of Heinz vegeterian beans - which in 1927 became the first product to proudly display the OU kosher symbol on the label.  I can't help wondering whether that had some influence on his recent purchase of Heinz- which happened the very next day.

Immediately upon receiving the larger basket Mr. Buffett donated it to Sue Ogborn from the Foodbank for the Heartland who accompanied us. 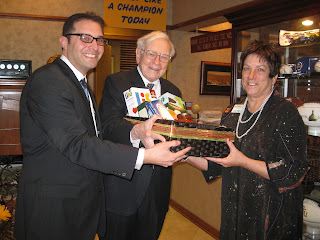 The real highlight of the visit was getting to have a chevruta with Rabbi Kripke and Warren Buffett as we learned together the passage in the Megillah that contains the mitzvot of mishloach manot and matanot li'evyonim. 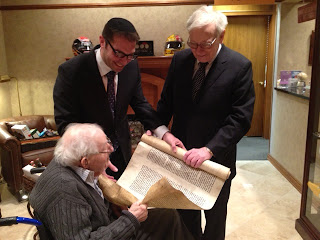 Mr. Buffett was his usual witty self.  When we told him that we came to perform the mitzvot of Purim he said, "I hope I don't qualify for the gifts to the poor!"

We had some fun, he told some stories, and we made this commercial promoting Purim and Sees Candy - a Berkshire subsidiary.


Many thanks to Warren Buffett for once again helping us with our food drive and of course thanks to the Food Bank for the Heartland for all of the great work that they do.

May we all experience the true joy of Purim - helping those less fortunate and celebrating with family and friends.
Posted by Jon Gross at 10:04 PM